GitLab is well-known for its advocacy of remote work. The company is fully committed to this sentiment, relying entirely on remote-first culture. That’s a serious decision, with potential consequences for the future of the company. However, what may seem like a risky move is actually based on solid philosophical principles. These principles are becoming more important to learn, as the whole world is starting to switch to new modes of work. What are they, and how do they apply in practice?

Thing is, the decades-old practice of “office culture” is dominated by unclear rules. Implicit, undocumented knowledge and flexible values lead to unpredictable, and often unproductive outcomes. A company may adapt to these difficulties, work around them – but what if they could be discarded altogether?

Having started with a hybrid-remote work model, GitLab founders – Dmitriy Zaporozhets and Sytse “Sid” Sijbrandij – had to face both the benefits and the challenges introduced by this approach. When nothing can be assumed, everything must be formalized. That was achieved with GitLab’s complete Remote Playbook. The sizable document provides the full, definite methodology for the company’s workers. There’s no uncertainty, and thus, less room for misunderstandings.

The main benefit of remote work – it challenges the existing preconceptions. And the resulting clarification starts a positive domino effect. Reinforced company values lead to productive and communicative workers, which produce beneficial projects. Of course, one can’t ignore the rest of the benefits on offer:

✅ No office expenses, no commute time

✅ Infrastructure focusing on QOL instead of worksites

✅ Freedom of movement for the workers

✅ Control over an individual’s workspace

Indeed, there is some global benefit that can be derived from remote work policies. It acts like an equalizer, providing employment possibilities across the globe. Flexible hours spent at home would improve the quality of life for many people. And the benefits of social distancing can’t be understated in the current viral situation.

Curiously, the company itself understands these outer benefits, and, in part, strives towards them, just like it would strive for any business goal. Genuine altruistic elements can be seen in every aspect of GitLab, starting from its humble roots.

The GitLab Remote Manifesto is a clear message to every employer. It doesn’t glorify the work model – instead, its basic principles are provided to stand on their own. They are convincing because they are reasonable. It’s a different set of methods – instead of being directed inwards, they are projected outside.

Every single statement in the manifesto is a concise theorem. It might be true, it might be false, but it can be tested. And if it turns out to be objectively true, there’s no backing out. In that case, any other course of action would be inefficient.

At the same time, it’s not exclusionary, as suggested by the use of “over”, and not “instead”. Formal communication does not exclude informal channels; documentation does not exclude hands-on experience. The Remote Manifesto suggests that the best results are achieved through a mixture of different actions – it’s just that these choices have to be informed.

Culturally, GitLab views the hybrid-remote workplace as an intermediary stage. It’s not surprising – in this work model, the employees have to negotiate with the management for the right to work remotely. As a result, the office is considered to be inherently justified, and other modes of operation need to be weighed against it. The scales, of course, are tipped in favor of the former.

Why would that be an issue? That’s because office work has costs attached to it. Treating it as a necessity prevents managers from assessing these costs correctly, and taking other options when that would be beneficial.

But even considering other options is already a step forward. And each stage introduces more efficiency, more choices, and more motivation to enter the next one. It’s also a necessary learning experience – a hybrid-remote workplace will help the management prepare for the novel challenges of full remote.

Even if a company is fully prepared to adopt the model, it will have to deal with adaptational phases. Some aspects of office life will need to be imitated temporarily, and advanced principles would have to be put on hold, until the appropriate phase is reached, where they can be implemented.

As a practical example with a successful outcome, GitLab’s story of transition between these steps is worth considering. After starting off in hybrid mode, the founders discovered that people preferred remote working conditions – to the point where they wouldn’t return to the office, when presented with the choice of working at home.

When we decided to become remote, our investors were worried about it. They said, ‘Look, there are very few remote companies at scale.’ At the time, there was WordPress and InVision.

We said, ‘OK, we’ll be pragmatic. As soon as we have a big breakdown in the leadership team or something, we’ll reconsider.’

This wasn’t a new concept to Dmytro and Sid. After all, GitLab started as an open-source project, not a business. Even the project itself was focused on resolving coordination problems in development teams. So, the right decision was obvious – GitLab went 100% remote, and entered a strange new world, full of difficulties and opportunities.

Despite making so many bold decisions, GitLab isn’t completely free of the old trappings of office life – virtual coffee breaks and “summits” are a definite sign of that. It remains to be seen whether the office aesthetic is truly immortal.

GitLab story started more than 10 years ago from this commit. But before this push, many decisions were made. Dmytro Zaporozhets devised GitLab as a solution to the tasks that GitHub failed to accomplish. Locally hosted, this code repository would let companies perform version control and team effort coordination in complete privacy. And the cheaper price was a bonus. The problems that it targeted were all personally encountered by the founder himself – at that point, he was working for Sphere Software.

However, the intensity of having to work for two companies at once burned him out. A tweet was issued, stating that Dmytro was tired. But he didn’t say that he wanted to quit – instead, he wished he was able to work on the project full-time.

There was a response. Sid Sijbrandij – a long-time contributor – was already invested enough to build his business on the basis of GitLab. So he took the next logical step, and offered Dmytro a salary. Naturally, it was accepted. The company was registered in 2014, and has grown to employ more than 1200 people since then, making it one of the largest remote workplaces in the world.

The idea of the GitLab Handbook was born in 2015, after the visit to that year’s Y Combinator. Despite not being a startup, and already having employees and clients, the company went through a pivotal point, rebuilding its approach from the ground up. This event can be credited with the inception of the “clarity” paradigm.

GitLab’s past is no less interesting, and no other event stands out more than the logo change. It’s quite surprising that it occurred before the company was registered and not after – had it been a business at that point, the change would be an intelligent move. 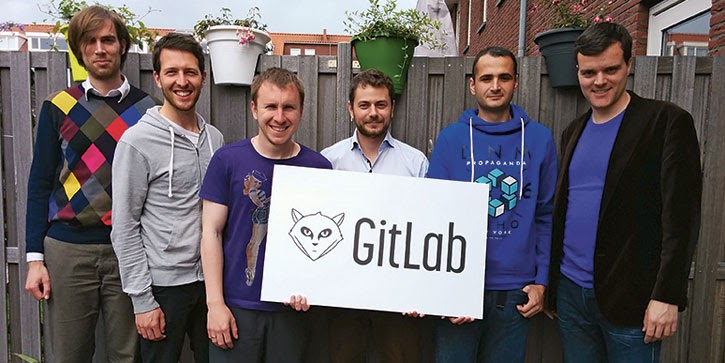 The old logo featured a Tanuki – a Japanese mythological raccoon-like beast. It has been described to have shapeshifting powers, even being able to take the shape of a man. In order to indicate this, the project’s logo featured an intermediate stage – a human-like raccoon face. The creepiness of this image was pointed out in several tweets. It didn’t help that the users were constantly being subjected to the unsettling gaze. After several suggestions, the new, minimalistic fox-like design was adopted instead.

There’s much that can be learned from the story of GitLab, things great and small. Some of them require an in-depth look at the company history; others are presented plainly in the playbook. Combined, this knowledge will drive the industries of the world towards a remotely-operated, globally-accessible future – and it already has.