Developed by Apple Inc., Apple Remote Desktop (ARD) is a Mac app replacing Apple Network Assistant. Initially released in March of 2002, it’s one of the preferred methods around how to access Mac remotely.

Similar in behavior to a VNC, it’s meant to support administrators overseeing many Macs at once—as well as team members needing remote assistance or group demos.

How does it work? Apple Remote Desktop gives users remote control over other computers via a network connection.

Requiring no additional hardware, it allows users to transfer folders between their devices, access a remote desktop’s Finder menu, and can even act as a task automation tool.

As shown above, paying the Apple Remote Desktop cost won’t break the budget, but it was mainly developed for large organizations with many devices to manage on a network. 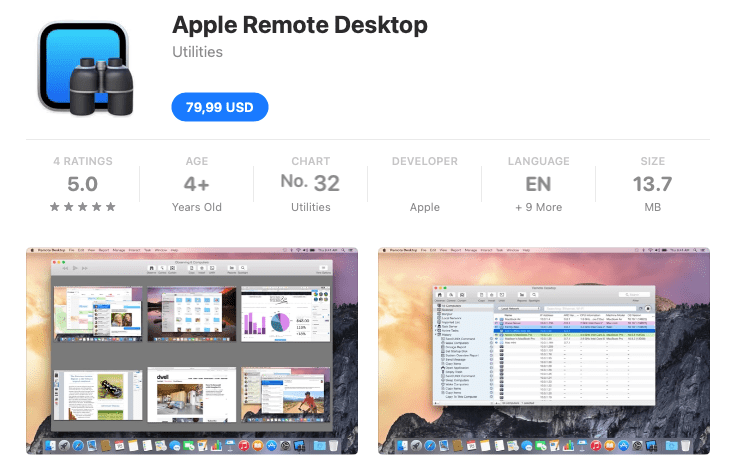 Users can even see if a specific computer has a Remote Management configuration, and whether it has (or has not) been added to the list of Remote Desktop computers.

Efficiently control the screen of a concurrently logged-in user, or any user with control and observe privileges enabled with Apple Mac Remote Desktop.

Apple Remote Desktop support allows users to manage another computer’s mouse, trackpad and keyboard—as well as transmit files, folders, and documents between Mac devices with the Drag and Drop feature. They can also copy and paste data between any two machines, regardless of their OS/platform.

Within the main window, Remote Desktop displays your computer lists, add additional computers to a list, monitor the entire group, or execute other managerial priorities.

Conveniently, when a management task is performed on one computer, it is reflected upon every computer on the same list.

Default computer lists are called All Computers lists. This lists outlines all potential clients that have been found and authenticated. Users can create an infinite number of lists, and add one computer to multiple lists at a time.

Enjoy automation for your Mac computers

Quickly and easily install files and folders with the installer packages, 3rd-party installer apps, or dragging and dropping data onto the client.

When will the Apple Remote Desktop be useful?

This Apple Remote Desktop app is equally helpful in business-oriented affairs. Remote users can access their onsite office computers from home, allowing employees to utilize important programs and documents no matter where they are.

Educators can enjoy oversight and control over shared network computers, and admins can manage entire remote systems at once, adding to productivity and expense benefits.

The pros and cons of Apple Remote Desktop

Note: If there is no prompt, users can define tasks by opening Options