Implementing RDP capabilities to your workflow opens up a plethora of opportunities, as well as access to incredible tools and distributions like Debian, VNC, XFCE4, XRDP Server, Vinagre, and more…

And while we’re mainly focusing on rdesktop in this article, there are many software options to choose from when it comes to remote desktop protocol: FreeRDP, Remmina, XRDP, Sudo apt, etc. Dealing with remote desktop protocol for Linux, Windows, and Mac doesn’t have to be a huge hassle, and aside from trying out the software and tools we’ve mentioned above, we’ll go into greater detail below.

Not only that, but the app is considered, by some, as the best remote desktop client for Linux remote desktop. However, since the end of 2019, the rdesktop client project is searching for new maintainers. FreeRDP is a fork of rdesktop. The app became the standard RDP client on systems where no native Microsoft client is available.

Here we will talk about rdesktop. But the advice is to use the other RDP client, like Remmina or FreeRDP, unless you have a good reason to use the rdesktop client.

Users can get their own copy of the remote accessibility software (versions: Linux rdesktop, Windows 10, etc) from Github by clicking here. However, prior to download and installation, it is recommended to use Linux Distro’s package manager.

Regardless of where you find your rdesktop Linux copy, it’s best to use package managers during setup, allowing for dependencies to be configured automatically.

However, for users who haven’t installed the rdesktop client Linux/Debian via the package manager, they can extract the tarball and alter the directory as follows:

Issues can arise when using the basic “./configure” command specified in the README file. Hence, users should try the command listed below if they experience any problematic configuration results.

Please note: If users try this configuration command, they must also uncheck “Allow connections only from computers using NLA” settings on the Windows remote machine.

How To Use rdesktop

While many remote accessibility options exist (like Remmina, FreeRDP, and XRDP), this tutorial focuses on rdesktop. Implementing this software isn’t too complicated, but enabling it to connect with a PC requires making changes on the actual Windows box. See steps below:

Step 3: Require at least one user with a password.

Step 4: Once you make all of the above Windows configuration settings, users can install the app on your system, and start accessing a Windows desktop.

Initiate RDP connections to the Windows box via hostname or IP address. Users should be specified via the “u-username” parameter.

How To Use rdesktop On Linux machine

Remote desktop protocol is compatible with several Linux apps (like FreeRDP, for example), rdesktop being the most popular. Being that it’s available via most distributions, we’ve outlined its usage as follows.

The server displayed below is a CentOS server running GNOME (which also has a compatible remote desktop viewer called Vinagre) desktop. However, the process should function not just with the aforementioned program, but on Ubuntu, Fedora, Mint, Debian, as well as other distributions. The distribution’s native package installer should be used when installing the software.

How To Connect rdesktop Linux

Step 2: Use the rdesktop command and open a remote desktop session. The syntax is simple, alter the following example via the Windows server’s username and public IP address: “rdesktop -u Administrator 101.102.103.104”. 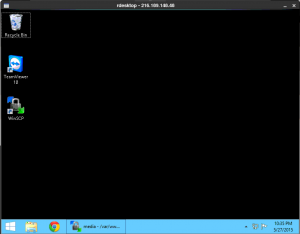 As you can see, learning how to connect the app doesn’t have to be overly complicated. Once the program is installed successfully, there are many options and enhancements to your remote desktop experience to choose from (like Vinagre- for example.)

Now that users have the opportunity to flex their remote desktop muscles with this tool, why not experiment with alternatives like FreeRDP, Remmina, XRDP, or Sudo apt? Remote desktop sessions are meant to enhance workflow, productivity, and accessibility for teams all over the world, so there’s no shortage of options to choose from.

Robert Agar
I use my wealth of experience in the IT field to help explain complex concepts so they can be clearly understood by a general reader.
Share article