The Internet of Things (IoT) is a collection of billions of connected devices that are used for a wide variety of purposes. Devices have different capabilities depending on the processing they are designed to perform. Each device has an onboard operating system that controls its actions and allows it to communicate and interact with cloud platforms.

IoT operating systems are different from the software that power your desktop or laptop machines because they do not need the same extensive set of features. We are going to look at what an IoT OS does and what makes an operating system compatible with IoT devices. We’ll also briefly discuss the best operating systems for Internet of Things implementations.

What is the Role of Internet of Things Operating Systems?

Not all IoT devices require an operating system to be functional. Simple endpoints like temperature sensors can transfer their data to a cloud-based system without an operating system. As the uses for IoT implementations continue to grow, so does the complexity of the devices used to create the systems.

Many IoT devices are comprised of multiple sensors, perform onboard data processing, and need reliable connectivity to maintain communication with control systems. They can be equipped with graphical displays or use facial and voice recognition for authentication. IoT operating systems provide the capabilities to perform basic computer activities on Internet-connected devices.

An IoT operating system is required to provide the functionality needed to effectively implement IoT solutions. The operating system controls the hardware and any software resident on the device. It can manage the processing power and facilitate data collection, transmission, and storage. IoT operating systems allow endpoints to communicate with cloud resources and other devices.

What Factors Are Important for an IoT Operating System?

Obtaining the full functionality of IoT devices requires a dedicated IoT OS. General-purpose operating systems like the macOS or Windows versions running on your laptop are not appropriate for use with the majority of IoT devices. Devices involved in fog computing must perform substantial computational activities onboard before transmitting data.

An IoT operating system is embedded in the device and must have the capacity to operate in constrained conditions. The OS for IoT devices needs to work within the constraints of the equipment on which it is installed. IoT device constraints play a big part in the type of operating systems they can support. Devices involved in fog computing must perform substantial computational activities internally.

The following are the main factors to consider when selecting an IoT operating system. The best IoT OS solutions effectively address these considerations.

Footprint – The constraints of IoT devices usually require an OS with a small footprint. This means the operating system consumes minimal memory, processing power, onboard storage, and other computing resources while performing its tasks. In some cases, compromises must be made between functionality and footprint when developing Internet of Things operating systems.

Security features – Security is of the utmost importance in an IoT operating system. Every endpoint in an IoT implementation is a potential security vulnerability that can be used to initiate a cyberattack. The security features an IoT OS should provide include:

Connectivity – An IoT OS should support multiple connectivity protocols including Ethernet, WiFi, BLE, and IEEE 802.15.4. Connectivity is a key component of IoT implementations as the distributed devices need to communicate with management software. It’s important to verify that the OS you choose for an IoT system supports the available methods of connectivity.

Scalability – The operating system needs to be scalable for any type of node or gateway to simplify development and integration. As an IoT system grows it can encompass multiple kinds of nodes and gateways. Organizations need a scalable IoT OS that lets them expand the environment without being concerned with compatibility issues.

User interface – An IoT operating system’s user interface can vary widely based on implementation requirements. In some cases, advanced graphical capabilities may be necessary to achieve the device’s desired functionality. Other usage scenarios may not need an extensive user interface, enabling the OS to fit in a reduced footprint.

Modularity – A modular IoT OS provides core functionalities in its kernel and enables advanced capabilities with the addition of dedicated modules. Modularity allows the operating system to be extended to address specific usage requirements without exceeding its maximum footprint. Implementers can choose the modules they need while not using excessive resources.

Reliability – Many IoT devices are located remotely and are expected to operate flawlessly for years. An IoT operating system needs to be extremely reliable and should be certified for applications with certifications that include ISO 62304, ISO 61508, and DO-178B. Failure of remote IoT devices due to OS problems can render a system useless and result in expensive and time-consuming maintenance.

Development support – Support for an IoT operating system is critical if issues arise with its implementation or functionality. You want an OS that is actively being developed to add new features and address vulnerabilities. Ensure that ongoing support is available for the selected OS.

The Most Popular IoT Operating Systems

The following IoT OS list contains some of the most popular choices for developers working with IoT applications and devices. They range from proprietary solutions to open source operating systems supported by community development. Some of the IoT operating systems have specific characteristics that may make them more appropriate for your usage scenario.

Contiki NG (Next Generation) is an open source IoT OS that specializes in connecting small and low-powered microcontrollers to the Internet. It features a minimal footprint with the complete operating system taking up less than 30KB. The software’s developers employ a minimalist design that provides the functionality needed by modern devices including dynamic module loading to address post-deployment application changes.

FreeRTOS was developed by Amazon and released as an open source, microcontroller-based operating system. It uses Amazon Web Services (AWS IoT Core) to run IoT applications and its small (as low as 9KB) footprint is well-suited to constrained endpoint devices. The features of this IoT operating system include support for over 40 MCU architectures, modular libraries for additional functionality, and integrations with AWS solutions.

Mbed OS employs an ARM processor to provide a range of connectivity options that includes WiFi and Bluetooth. It’s a secure IoT operating system that offers multilayer security with isolated domains and TLS for secure communication. Libraries required for the desired functionality are automatically downloaded to the device so developers can concentrate on their application code.

MicroPython is an optimized implementation of the Python 3 language designed to run in constrained environments. It features a full Python compiler that runs on bare metal with standard core libraries and offers additional hardware-specific modules. The software’s relation to Python makes this OS for IoT devices easy to learn and suitable for implementations that require rapid deployment.

Embedded Linux is an implementation of the popular operating system tailored for use in constrained environments. The IoT OS is based on the Ubuntu Linux distribution which is familiar to a large community of developers. Embedded Linux takes the operating system’s kernel and optimizes it for reduced resource consumption. The OS also provides enhanced security that includes the ability to perform full disk encryption.

RIOT is a free, open source IoT operating system developed by a community of developers from the worlds of business and academia. The OS supports all Internet standards and common networking technologies. Features include full multi-threading, enhanced security, and familiar development tools. RIOT enables development in Linux, Windows, and macOS environments.

TinyOS is an open source IoT operating system developed using a dialect of the C programming language. It is a popular choice for constrained devices due to its ability to optimize memory usage in IoT devices. TinyOS is an excellent selection for use with embedded, low-powered wireless devices.

OpenWRT is an open source IoT operating system based on Linux. It is a highly-customizable OS that has all the features of a full Linux implementation. The operating system is focused on embedded devices and routers. It employs package management to tailor the OS to meet the needs of any IoT application.

The following chart, based on the survey by IEEE, European Commission (Agile IoT) and Eclipse IoT Working Group, illustrates the most popular IoT operating systems in 2016. We apologize for the fact that more recent information is not available in the same statistical format. 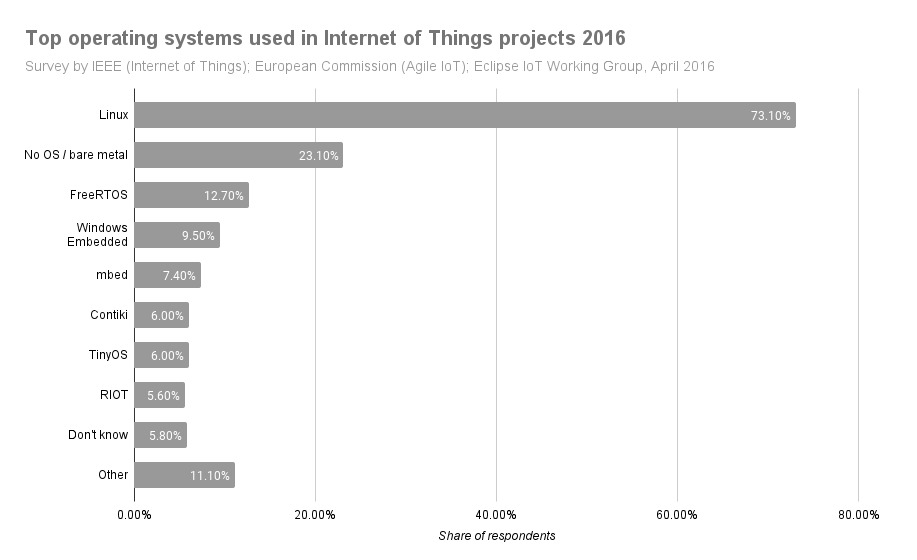 The chart makes it clear that Linux was the IoT OS favored for IoT implementations. While other operating systems now enjoy increased popularity, Linux and Linux-based operating systems are still immensely popular for IoT environments.

The popularity of Linux-based IoT operating systems is due to the familiarity of Linux in the developer community and the software’s proven ability to run mission-critical applications. It’s possible to develop lightweight implementations that address the constraints of IoT devices while affording the necessary functionality to perform the advanced tasks necessary in IoT systems.

IoT technology is providing innovative solutions that impact virtually all aspects of modern life. IoT devices are deployed in advanced systems that collect data and perform real-time analytics that contribute to smart cities and efficient industrial automation. While there is incredible variety in the types of IoT devices in use, many of them share the need for a dedicated IoT operating system.

Choosing the right operating system for an IoT implementation needs to take several factors into consideration. The majority of IoT devices operate with constrained resources, requiring a lightweight operating system that delivers the necessary functionality. In some cases, an operating system may be selected for reasons such as its user interface or connectivity options.

The operating system used for an IoT system should be selected carefully with input from the developers who will be responsible for maintaining the IoT environment. Their familiarity with the language used to construct an open source operating system enables modifications that enhance the efficiency and productivity of the resulting system. The range of IoT operating systems available makes it highly likely that your team can find one that effectively addresses your requirements.

Robert Agar
I use my wealth of experience in the IT field to help explain complex concepts so they can be clearly understood by a general reader.
Share article
Tags
Expert opinion, Tutorial
Close