TABLE OF CONTENT
Defining VPN vs. VDI vs. RDS
What is a VPN?
What is a VDI?
What is RDS?
Head-to-Head Comparison: VPN vs VDI vs RDS
Performance
Customization
Interface
Security
Cost
Usability
Setup and Maintenance
Which Is Better VPN, VDI or RDS?

In the post-pandemic world, the transition into remote work has increased dramatically, meaning that companies of all sizes are forced to adapt quickly to compensate and ensure both their employees and brand thrive. The most effective way to do that is with remote desktop services that enable fast and secure desktop virtualization.

The good news is, this article will provide you with insight into three of the most popular remote access solutions. Keep reading to learn the difference between VDI and VPN, and RDS vs.VDI remote desktop connection tools.

Defining VPN vs. VDI vs. RDS

VDIs, VPNs, and RDS are all remote access solutions that allow organizations of all sizes to provide secure remote access processes to their team. Each option offers a variety of pros and cons—and pending on the size and demands of each enterprise, there are factors to consider.

What is a VPN?

VPNs (Virtual Private Networks) are an extremely effective security tool to protect apps and sensitive data in remote work environments. VPNs not only provide secure logins, but also defend against identity theft (and other cyber attacks) while users browse the internet.

In the most basic terms: Virtual Private Networks are an added layer of security that keeps your apps and internet connections safe — be it via personal VPN or one housed on a server within your enterprise.

Utilizing a VPN to connect to the internet means the user is navigated via a private virtual channel (like a VPN server) that other (unauthorized) users can’t access. Most often acting as a server hosting the application, the virtual channel accesses the internet on your computer’s behalf.

The VPN acts as a fiduciary, meaning your location and identity are cloaked from hackers and other nefarious forces. Impressively, there are a wide variety of VPNs that offer military-grade security and encryption (in the virtual channel).

Note: Encryptions will vary pending on the users’ (or organization’s) individual needs.

VPNs were developed because organizations wanted to secure and defend their sensitive data when using public or private networks. VPN access is usually done via authentication options like certificates and passwords (but there are more methods, as well).

VPNs are a point A to point B virtual communication tool allowing users to access resources (like shared folders, data, files, and applications). Users can only access these resources if with permission from the network/server they’re connected to.

The one considerable drawback is that speed decreases from the connection being routed and encrypted.

What is a VDI? 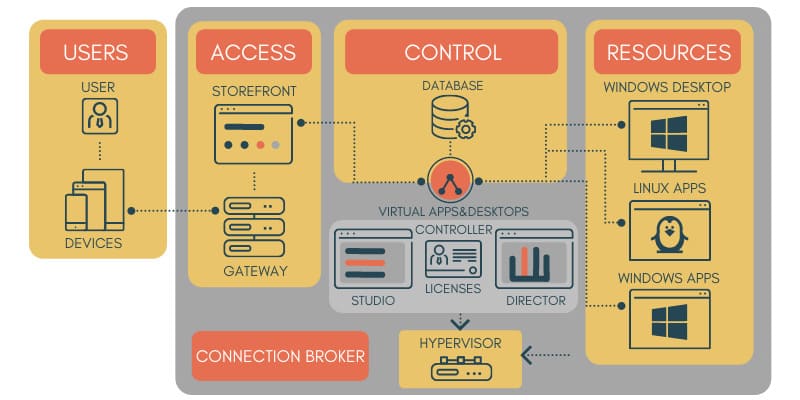 What makes VDI remote access quite popular is its extensive customization. In other words, each VDI virtual desktop is configured to the specific end-user—meaning that the environment will feel as fluid as if they were working on a local machine. Users can even access their VDI via laptop, desktop, or mobile device (like a mobile phone or tablet).

This flexibility allows users to access the needed materials whenever they like, no matter where they are.

VDI aims to provide every user with their own (Windows-based) system. Every virtual desktop is located within virtual machines hosted on a central server. Every VM (virtual machine) contains dedicated resources meant to enhance connection security and performance.

Since virtual machines are host-based, more than one VM instance can run on the same physical or virtual server (which can be a cluster of numerous servers).

The security benefits of VDI are very valuable, as there is no way for sensitive data to get stolen because everything is hosted on the central server. VDIs also provide consistent user experiences regardless of the device being used, which greatly enhances productivity.

Desktop as a service was once known by another know: Windows Terminal Services. WTS (alongside MS Windows 2008) was launched by Microsoft—and was later known as Remote Desktop Services. Thus, users can connect to the server via client devices, and access the resources housed on the server.

The client device accessing a server via a network is called a thin client. Thin clients don’t need anything but client software installed.

Everything resides on the server, and workers can use their assigned credentials to access and control servers as if they were operating the local machine. The user sees the server’s interface and must log off the ‘virtual machine’ once their work is completed.

All users connected to the same server share all resources housed on the server — which is accessible via any device, even though PC and laptop users will have the most fluid and pleasant experience. Connections are secure for users working on the server, and only the client software is local.

Now that we’ve reviewed the basics of what VPN vs. VDI vs. RDS vs. do, we’ll provide a comparison table going over seven major factors to consider. As a general rule, keep the following in mind:

VDI: VDI wins the day regarding performance— especially for those reliant on speed and processing power (graphics industry). Being that VDI offers dedicated, compartmentalized resources per user, performance, and speed are massively improved.

VPN: Alternatively, VPNs are considerably slower pending on the client hardware, the volume of transferring data, and the level of encryption in place.

RDS: Middle-of-the-lane performance goes to RDS, while it’s not the fastest, it does provide general user satisfaction overall.

VPN: Virtual Private Networks are just used as a secure way of accessing public networks via remote channels, so there is no customization.

VDI: Virtual Desktop Infrastructure sets itself apart with its unique and extensive customization options. Users can personalize their desktop experience with pre-installed programs/configurations pending upon an organization’s specific requirements.

VDI: Every user can work from a customized Windows system interface that improves productivity with comfort of familiarity.

RDS: Unlike VDI, RDS functions so that users on the server are provided with an identical server interface, regardless of the user or instance.

VPN: The VPN only offers an established point-to-point connection via a tunnel. Processing occurs on the client system—which differs from both VDI and RDS.

VPN: Virtual Private Networks dominate when it comes to device, individual, and network security. However, organizations can’t do much to limit end-user access to websites, networks, and data—which means those security protocols must be implemented manually.

VDI: Can be configured to prevent data from leaving the corporate environment/and networks.

RDS: Can be configured to prevent data from leaving the corporate environment/networks, as well.

VPN: VPNs are great if cost is the main decision factor because very few add ons and updates are necessary — allowing end-users to keep operating their own devices. Users can securely connect to their corporate network without seeing any data being shared.

RDS: RDS can be extremely time and cost-effective thanks to its scalability, mobility, and user-friendliness. Additionally, all of these benefits do not come at the cost of weakened security.

VDI: This is the most expensive option because it requires added software setup like Citrix and VMware to help run the Virtual Machines being hosted.

VDI: Thanks to virtualization resources, VDI has increased scalability and speed. However, configuration and maintenance can be challenging. VDIs are highly customizable, but admins have the option to set parameters to enhance security and restrict access to specific databases and files.

VPN: Workers can operate their own devices, making it much harder to control individual access—but doesn’t require practically any setup or additional hardware.

VPN: All processing is done on the client-side with VPNs, while remote and virtual desktop processes occur server-side. Being that VPNs are compatible with many OS and applications, the hardware is rarely an issue. The VPN platform manages updates and maintenance.

RDS: Supports Windows and macOS, but performs better with Windows operating systems. Users will be responsible for some patching and maintenance, but interfaces are unified and fewer machines are involved.

VDI: A separate virtual machine is required for each end-user, making system updates and patching harder.

Which Is Better VPN, VDI or RDS?

Every organization has unique demands to consider when choosing between one of these three solutions.

For example: VPNs and RDS’ are great (and very cost-effective) options for smaller businesses that don’t have as many needs.

Adversely, larger enterprises with mobile or graphic processing requirements could better benefit from the performance power of VDIs.

The demand and industry for remote access software are climbing at a rapid rate. The branches of remote options of RDS, VDI, and VPN all have similar use cases.

Consequently, factors such as user volume, remote access usage, the centralized server, and more… must be considered when choosing which option is the right choice for a corporate environment.

Each option provides a plethora of advantages and disadvantages, and we hope this article has helped you learn more about these solutions to make the best decision for your team.